How Urban Trees Can Save Lives

HEATWAVES ARE ONE OF THE WORLD'S most underestimated threats, killing more than 12,000 people every year around the world—more than any other weather-related event. And heat is especially dangerous in cities, which tend to be much warmer than surrounding less-developed areas. On top of that, cities tend to have higher levels of air pollution, which contribute to more than 3 million deaths every year. With 70 percent of the world’s population predicted to live in cities by 2050, heat and air pollution constitute a major public health concern.

One relatively simple solution to this problem? Plant more trees in cities. Trees cool the air by casting shade and releasing water vapor, and their leaves can filter out fine particulate matter (PM)—one of the most dangerous forms of air pollution, generated from burning biomass and fossil fuels. The Nature Conservancy (TNC) has studied the effects of trees on air quality in 245 of the world’s largest cities and documented the findings in the Planting Healthy Air report.

Key Takeaways of the Report

The Planting Healthy Air report documents which cities stand to benefit most from tree plantings, in terms of both heat and PM reduction, and how much investment would be required to achieve meaningful benefits.

The analysis found that investing just US$4 per resident in each of these cities in tree planting efforts could improve the health of millions of people, and that trees are as cost-effective as many other common solutions.

Most of the cooling and filtering effects created by trees are fairly localized, so densely populated cities—as well as those with higher overall pollution levels—tend to see the highest overall return on investment (ROI) from tree plantings.

The localized nature of trees’ effects, however, means that particular neighborhoods in virtually any city could benefit from plantings. City planners can even target plantings to protect areas with especially vulnerable populations—such as near schools and hospitals—or use trees as a screen against PM coming from highways and industrial areas.

While trees alone can’t solve the entirety of cities’ air and heat problems, they are a critical piece of the puzzle. The report shows that even a conservative global investment in urban trees can save tens of thousands of lives.

Click to explore the interactive map to see which neighborhoods within each of the cities from the study have the highest return on investment for heat and PM reduction. 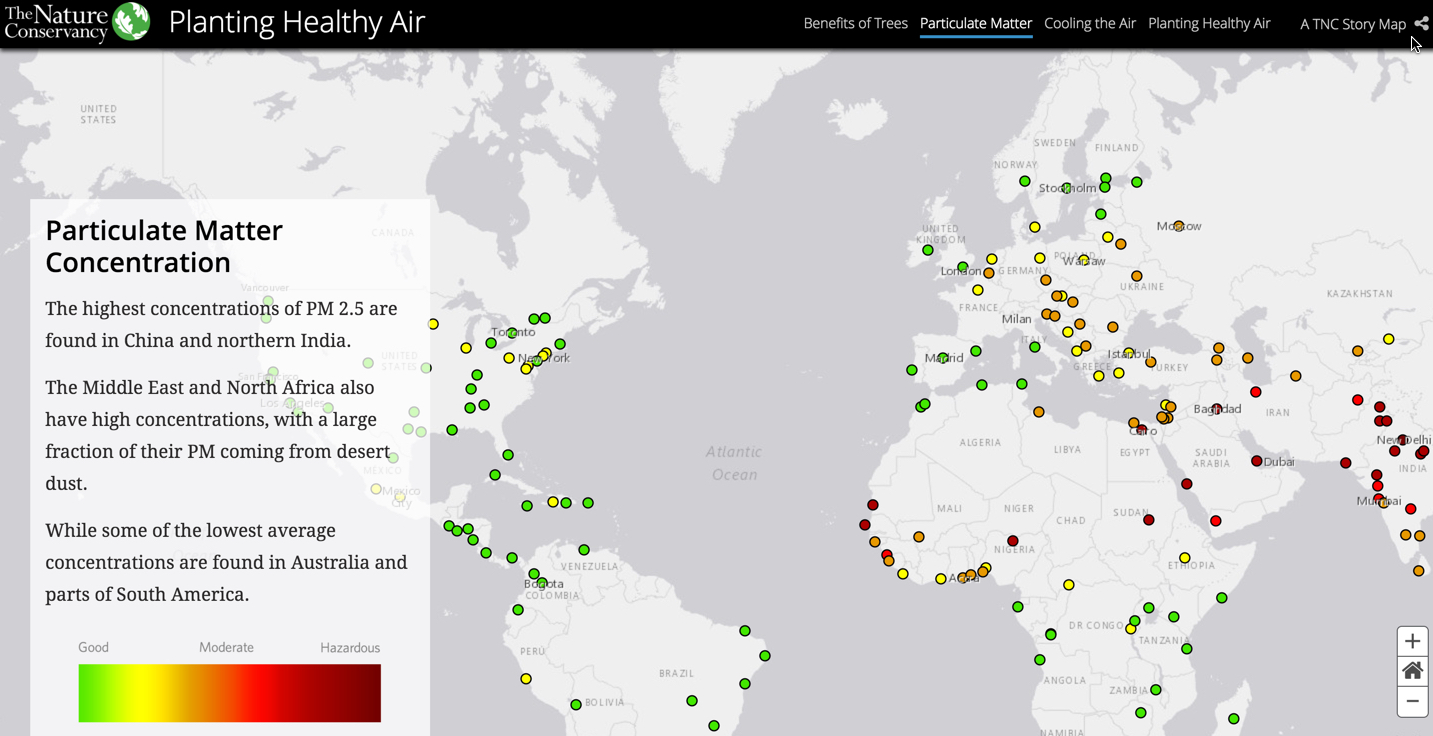 With 28 million people living in the greater metro area, Jakarta is the largest city in the world without a metro system—and also home to some of the world’s worst traffic jams. The resulting emissions from vehicles, along with smoke from the burning of forests and agricultural land, contribute to dangerous levels of PM—not just for Jakarta but much of the surrounding region, too.

While the Indonesian government has taken steps in recent years to control pollution and prevent illegal burnings, Jakarta would still see a high ROI from tree plantings compared to other global cities, especially for PM reduction. An annual investment equivalent to US$4 per person could bring significant temperature and PM-level reductions for nearly 4 million people in the city. 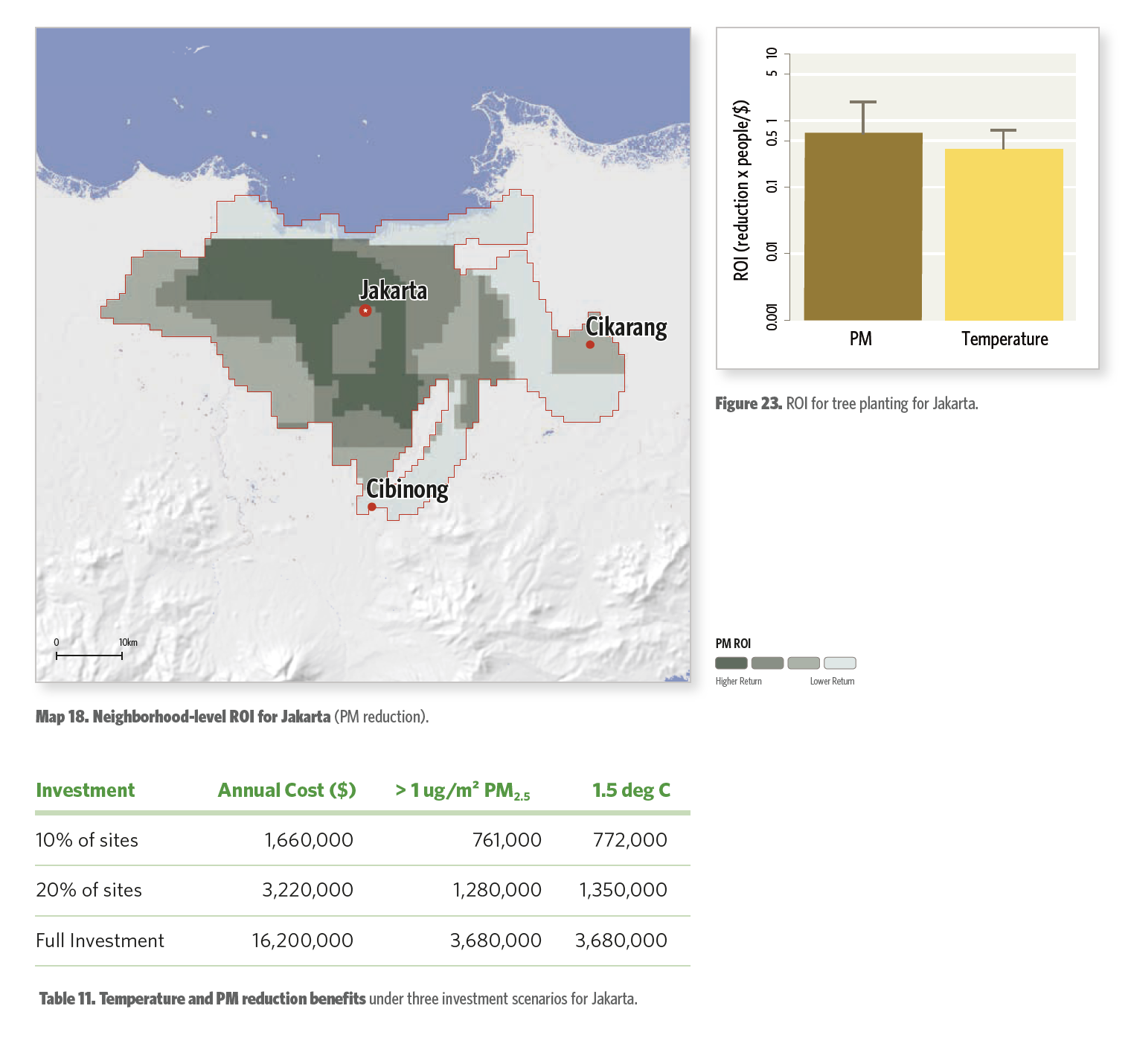 Atlanta already has some of the densest canopy cover of any North American city—so, unsurprisingly, it shows a relatively low overall ROI from new tree plantings compared to other global cities. But the study shows that particular high-density neighborhoods within Atlanta—such as downtown neighborhoods along the Interstate 85 corridor—could benefit greatly from increased tree plantings, especially for heat mitigation. As Atlanta’s already-warm summer temperatures climb in the future, ensuring that all neighborhoods are protected from excessive heat will be even more important. 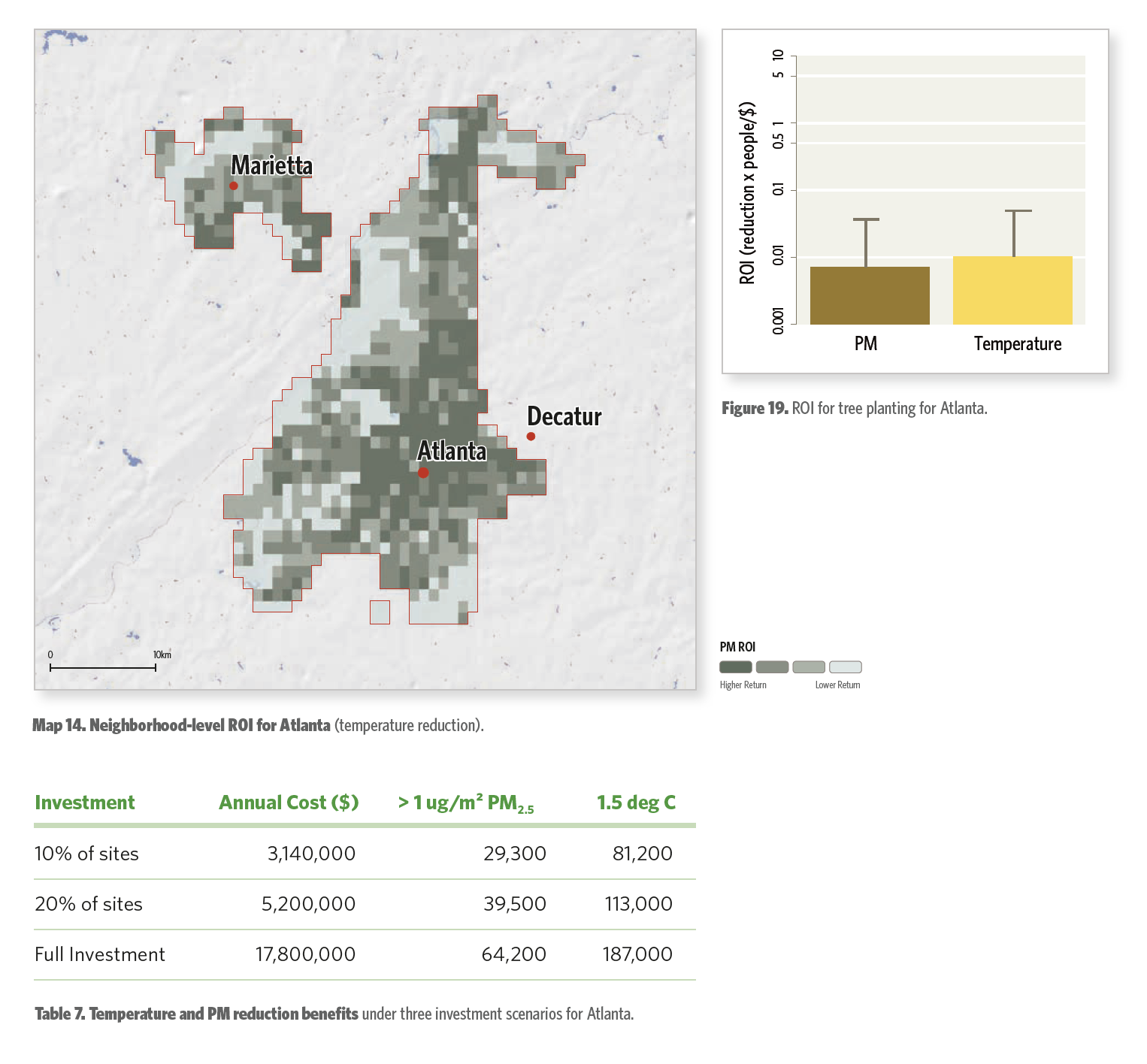 Tree planting is just one strategy that city planners can use to mitigate heat and air pollution, and the report lays out other strategies, such as use of industrial scrubbers and limitations on automobile traffic. But only trees can both cool and clean the air. Furthermore, trees and other green infrastructure provide a broad range of co-benefits, as well—including habitat for wildlife, stormwater control, recreation opportunities, and beautification of public and private spaces in cities.

Investing in trees and green infrastructure will only become more important in the future. The United Nations predicts that more than two-thirds of the world’s population will live in cities by 2050, increasing the number of people exposed to dangerous air conditions—especially if temperatures and PM levels continue to climb at their current rate. As the UN coordinates international efforts to mitigate climate change and invest in sustainable cities, tree plantings offer a strategy that city leaders can deploy in their own communities right now to protect the people who will benefit the most.

Hear from the Author

Rob McDonald, lead scientist for global cities, and author of the Planting Healthy Air report, briefly explains the cooling and cleaning benefits of trees. You can also read McDonald’s blog explaining the findings of the report on Cool Green Science.

An analysis by The Nature Conservancy on finance and policy actions to enable tree planting for public health.

A first-of-its-kind medical study could reveal new links between the benefits of trees and public health.