Foodscapes for People and Nature

What does it take to produce food? Think of it in layers, starting from the ground up. The bottom layer is the physical geography—perhaps a broad, flat plain, gently sloping toward a shallow river basin. Over the plains accumulates humus-rich soil, dense with carbon, calcium, and magnesium. Layer on a humid climate with heavy rains from June through September, and you have the conditions that support wheat and rice production in northern India.

Or perhaps it’s not a plain, but a series of mountain ridges and river-carved valleys, as in southern Spain, where food grows on pockets of quick draining soil under warm, dry summers and wet mild winters, supporting a patchwork of olive and almond groves with livestock grazing in between.

Or maybe you start in the sea, along the shallow continental shelf of the eastern United States, where rocks and reefs offer purchase for shellfish and estuarine rivers carry in a constant flow of nutrients—food for growing oyster colonies, which in turn serve as nurseries for both commercial and sport fish.

The need for food may be a universal constant, but the way we produce it is different around the world—especially when you layer on specific farming practices, market forces, distribution challenges, public policies and local communities and cultures.

What Makes a Foodscape?

New science defines foodscape classes, bringing together biophysical qualities and management attributes of food producing regions around the world. When mapped, foodscapes form a mosaic of interlaced systems that help realize the potential for nature-based solutions sensitive to local conditions while also understanding how economic, political, and community systems intersect when producing food.

The world’s food producing land and seascapes are diverse, shaped by their biogeographic and cultural contexts. The base layer of a foodscape consists of the geographic features distinct to that region, including the soil makeup, climate, land features, freshwater access, or qualities of a seabed.

This layer of a foodscape encompasses the practices deployed by producers, such as irrigation techniques, tillage or level of nutrient inputs.

Taken together, researchers identified terrestrial foodscapes based on their particular combination of biophysical and management-related variables and more than 80 distinct foodscape classes emerged from the analysis.

Building on the scientific classifications of foodscapes–combining the biophysical characteristics and management attributes–we can better understand how foodscapes are affected by market demands, distribution challenges, public policies and local communities and culture.

Explore the Layers of a Foodscape RETURN 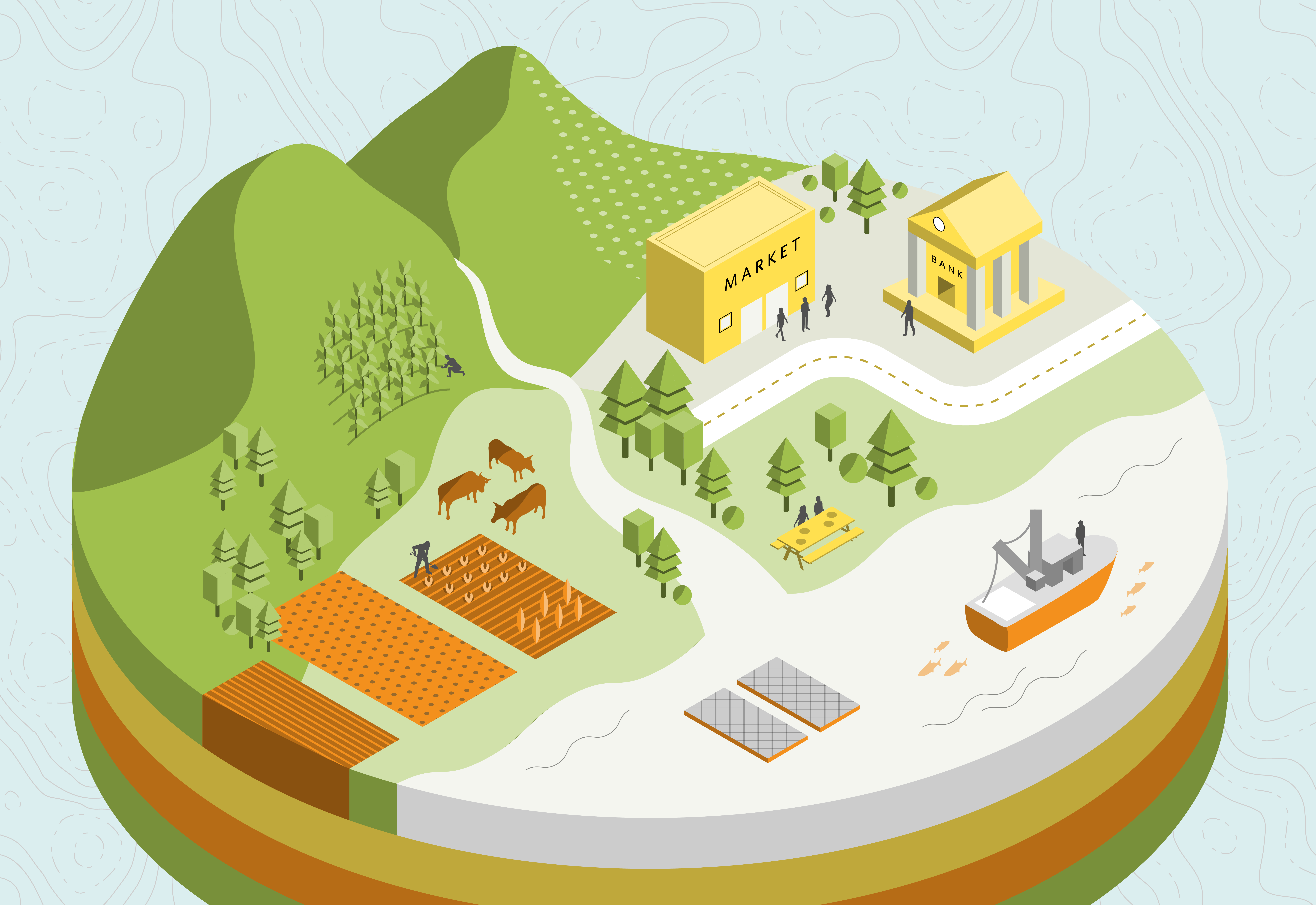 Understanding the diversity that underpins our global food systems is crucial if we are going to change it—and change is needed. Today we are in the midst of a paradigm shift in how we think about food, away from a system that pits human needs against nature—to the detriment of both—and toward one that embraces the role of nature in ensuring long-term food security. But global transformation starts with local change—and the foodscape concept can help build bridges between global ambition and local implementation.

Get the Science Brief: Planning for the Future of Food

Read the preview of the global foodscapes science report and sign up for our newsletter to be notified of the full report release.

Food distribution is a complex global process: Argentina sends beef to China, which sends tilapia to the United States, which sends wheat to Indonesia, which sends coconut oil back the United States and China. But the production of food is inherently local, if no less complex. Food production is influenced by biophysical, economic, political and community systems. A foodscape is the intersection and interaction of all these systems in a geographically defined space.

What is a Food System?

A food system is the complex web of activities–and the beliefs and values that shape these activities–associated with producing and consuming food. This includes the production, processing, transport, preparation, consumption, and disposal of food.

Using advances in modern data mapping, we can not only identify the biophysical layers of food production—like geology, ecology and climate–but also map their geographic boundaries with greater detail than previously possible. At the same time, we now have sophisticated data sets on the agronomic practices used in food production regions, detailing how average farmers are deploying practices from irrigation to tillage and levels of nutrient inputs.

Taken together, we can now classify various food production types around the world and use those to better understand how they interact with the socioeconomic layers of a foodscape. By mapping the diversity of food production types around the world, we can offer a guide to changes that make sense at the local foodscape level, including the introduction of nature-based solutions that both support production and mitigate environmental threats, in ways that add up to big impacts globally.

Planning for the Future of Food

Download the brief now, and sign up to receive our forthcoming report Foodscapes: Planning the Food System Transformation, which includes analysis on the risks to and from global foodscapes, the potential for nature-based solutions and detailed case studies including economic analysis of foodscape implementation in different foodscapes around the world.

Often we think about food systems transformation as a global challenge, and with good reason—many food production methods are major drivers of climate change and the destruction of nature, accounting for nearly one quarter of greenhouse gas emissions and as much as 80 percent of biodiversity loss. At the same time, climate change and biodiversity loss will make it much harder to produce food in the future, threatening the livelihoods of producers and ultimately making it more difficult to feed growing populations.

The recommendations and solution sets that arise from global assessments and studies repeatedly articulate the ways global food systems can shift to be more in line with human demands and planetary boundaries. What remains less clear are the specifics: what to do, where and when, and how to drive durable transformations on the ground, which is where the foodscape shows its true worth as a vehicle for creating positive change for people and nature.

Working at a foodscape scale enables planning for food production transitions that bridge the space between global scenarios and locally led approaches. By design, the distinct foodscape classifications offer a new unit of analysis which may form a mosaic of classes within a political area, a defined geography or biome, or even a key agroecological sourcing region. In doing so any policy maker, economist, analyst, or community leader can use foodscapes as a tool to help map a relevant path towards food system transformation.

From Ambition to Action

In our upcoming report, The Nature Conservancy and partners will further define the foodscape concept—including our methodology and key case studies; the attributes and vulnerabilities of particular foodscapes; and optimal nature-based solutions for particular foodscapes. This tool is meant to help national and local leaders transform food production from a challenge to an opportunity—to fight climate change, to improve local economies, and to support the restoration of the planet.

Fundamentally shifting the way our food systems work is one of the most important challenges we face as a planet—and one of the most complicated. “We can only solve the conundrum of making food systems work both for people and the planet if we are looking at the real world—if we are looking at the chains and the dependencies along the systems,” said Martin Frick, Deputy to the Special Envoy for the UN Food Systems Summit, at a recent panel discussion. “The concept of foodscapes helps us think about and embrace the complexities and interdependencies in a new way.”

Get the Science Brief: Planning for the Future of Food

Read the preview of the global foodscapes science report and sign up for our newsletter to be notified of the full report release.

We need a food system that goes beyond sustainable and creates positive growth for communities, economies and the planet.

The Global Food System is Ripe for Change

Explore Our Insights Get The Newsletter