European cities, like those around the world, have traditionally depended on costly “grey” infrastructure and engineered solutions to power their water supply systems—think of dams, reservoirs and filtration plants. But as they look to the future and consider how to secure their water resources in the face of a changing climate and growing population, investments in nature must also be part of the solution.

But to maximize these benefits to European cities, more must be done to protect freshwater systems across the continent. In Europe, roughly 75 percent of all water secured annually and 40 percent of all drinking water consumed comes from surface waters such as rivers, lakes and reservoirs. Yet as of 2015, only 40 percent of such sources were in good ecological status.

A new report by The Nature Conservancy, Ecologic Institute and ICLEI-Local Governments for Sustainability identifies European cities that can best use nature-based solutions (NbS) to address diffuse pollution, enhance drinking water quality and protect the integrity of their upstream watersheds. Based on a novel analysis, the report assesses the potential for a range of NbS to mitigate diffuse pollution challenges associated with soil erosion and nutrient use for agriculture. The analysis offers a nuanced understanding of where NbS could play a significant role in addressing these challenges and how they can best be deployed.

What nature-based solutions can best tackle diffuse pollution from agriculture?

To deliver on their full potential, the right type of NbS must be deployed in the right places and at the appropriate scale. The report examines the potential of four common solutions to mitigate diffuse pollution challenges and generate benefits for people and nature: cover crops, riparian buffers, forest protection, and reforestation (see chart below).

Nature-based solutions for source water protection modelled in the report 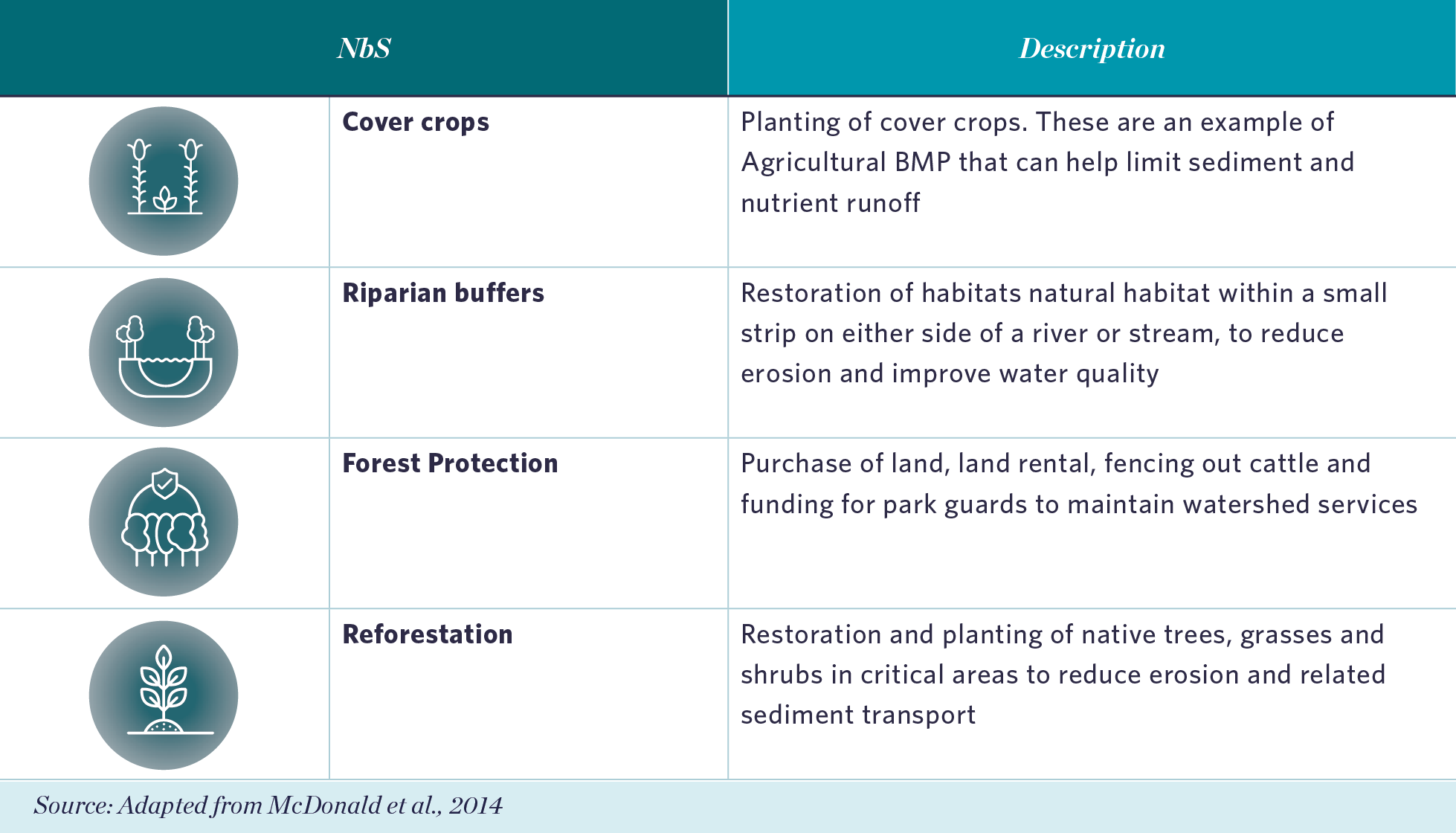 To help prioritize and mobilize NbS investments in Europe, the report models the impact of nutrient and sediment pollution for 109 European cities that are significantly reliant on surface water sources for their drinking water supplies and are particularly exposed to diffuse pollution due to significantly altered landscapes. These cities are home to 78.5 million people—equivalent to 15 percent of the population of the European Union and the United Kingdom combined.

Comparison of NbS potential across different NbS and pollutant types 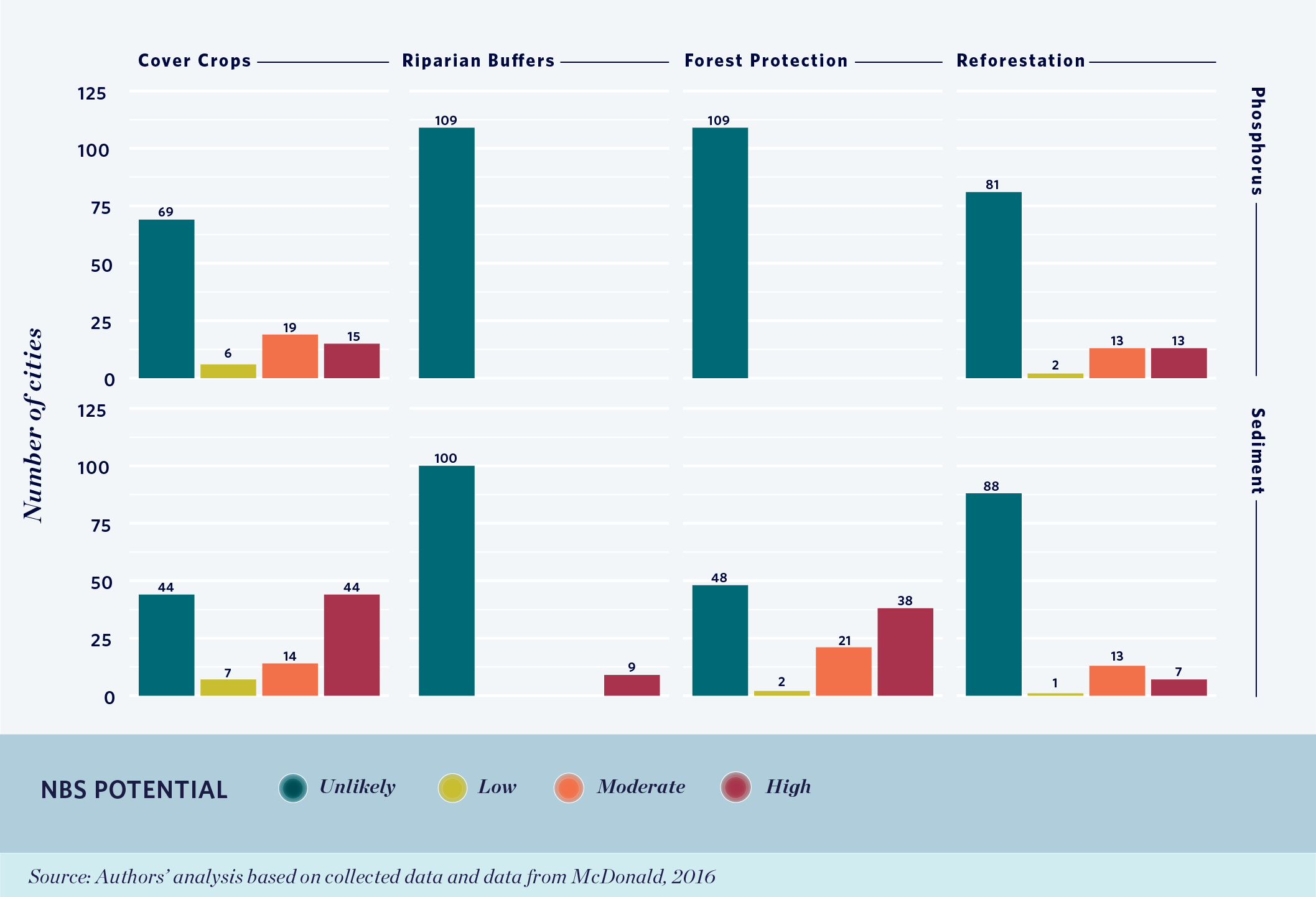 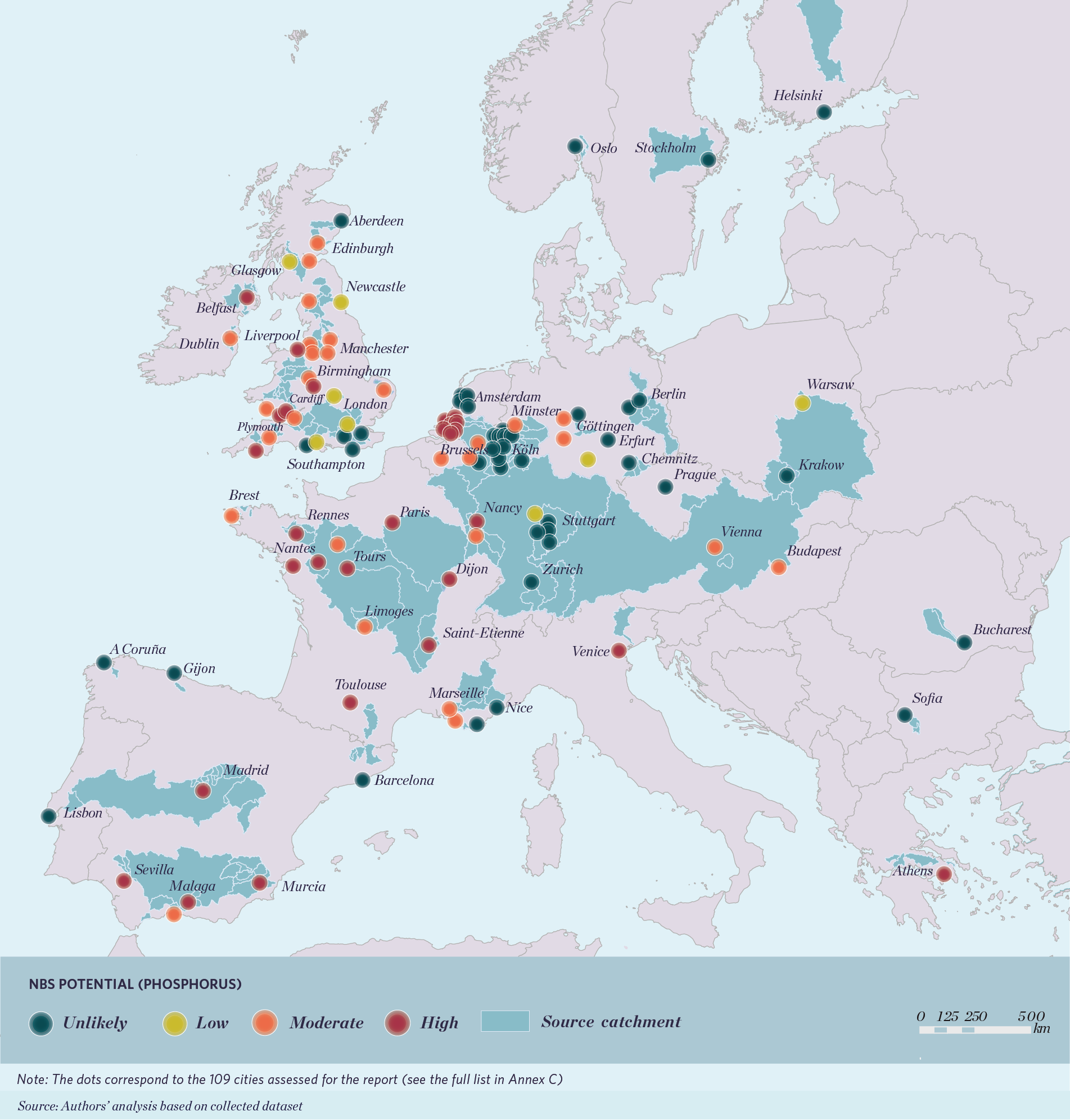 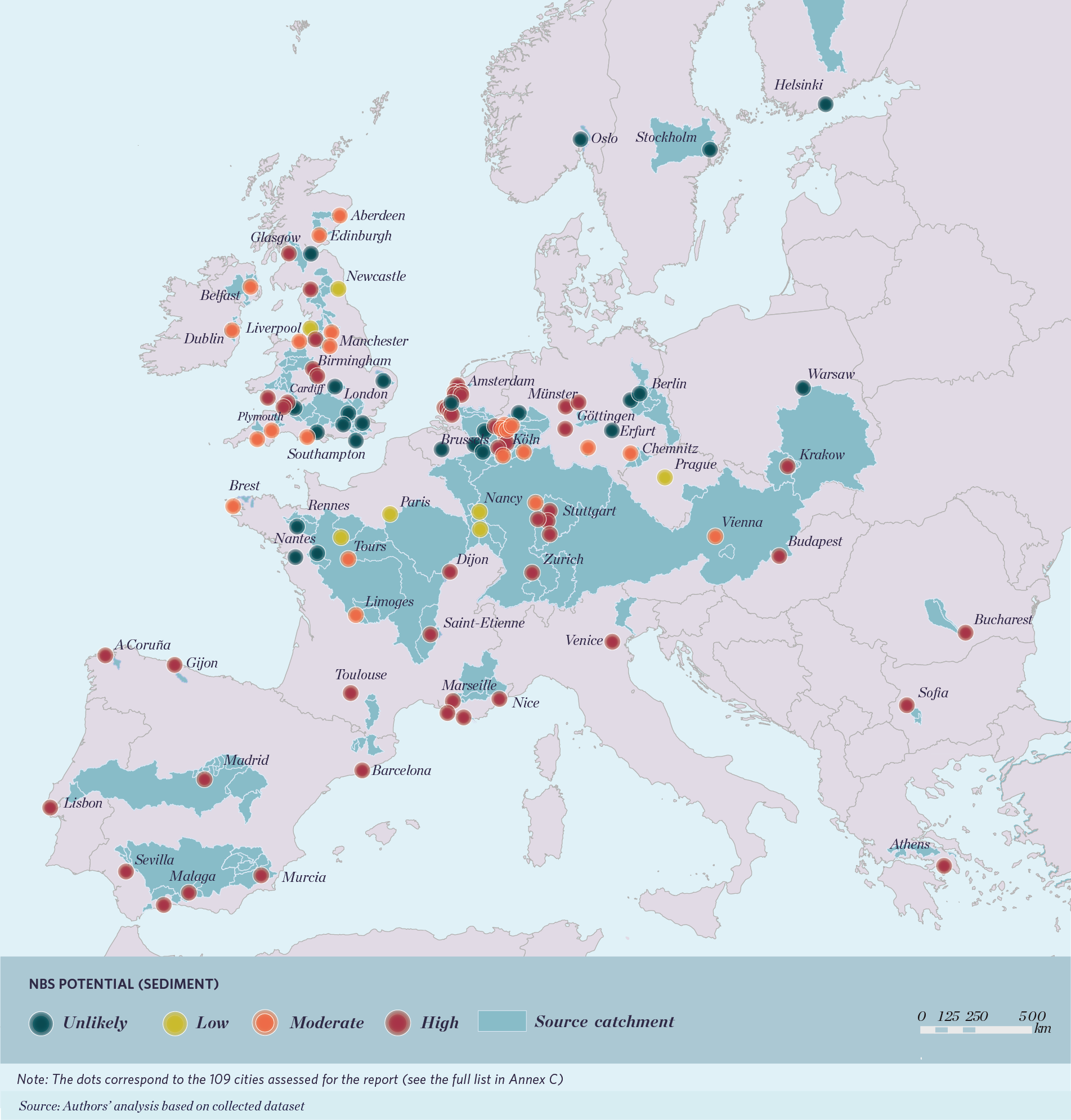 In order for NbS to deliver maximum impact on water security in Europe, a number of strategic steps must be taken. First, NbS must be implemented at scale—a piecemeal approach is unlikely to have much impact. Second, it’s important to prioritize those areas where nature can provide the greatest impact in order to demonstrate proof of concept and mobilize funding. Third, more localized collective action mechanisms should be established to coordinate stakeholders across sectors and accelerate the implementation of NbS. Existing governing mechanisms, like River Basin Districts, are in place throughout the European Union but are not set up to tackle specific challenges and implement coordinated actions at a more local level. And finally, it’s important that these efforts operate with clear targets and are designed to monitor outcomes—this is crucial for adjusting strategies, and for demonstrating effectiveness and driving further buy in.

Looking Forward: Accelerating the adoption of nature-based solutions in Europe

The policy and legal framework for deploying NbS for water security in Europe is well established. But, as described in a companion report, steps to implement such practices to date have been limited due in part to fragmented investments that lack sufficient focus and coordination.

But today new opportunities are emerging that could streamline and accelerate the adoption of NbS as part of water sector investment plans. Policy initiatives under the European Green Deal and urgency generated by the COVID-19 recovery are presenting renewed support for NbS investments. Adding to the urgency, EU Member States are required to deliver results through the next round of River Basin Management Plans (which will run until 2027) or risk facing fines from the European Union.

The next seven years present a unique opportunity in Europe to demonstrate how NbS can deliver substantial improvements to tackle diffuse pollution, improve water security and help countries build back better.

The Nature Conservancy is fortunate to have the support of visionary people and organizations, whose generosity allows us to pursue our mission. We are grateful to the Enterprise Rent-A-Car Foundation for supporting our work to find water solutions that work for rivers and the communities that depend on them.

Water stress is a serious problem across Europe, but nature-based solutions help address many water-related challenges.

How Will Europe Ensure a Water-Secure Future?

The continent is addressing its water challenges with big investments in natural infrastructure.

Explore Our Insights Get The Newsletter